▪ For our readers we have received exclusive discount coupon codes from Banggood, with which you can save up to 25% when buying Mavic, Spark, Mini FPV Racers and accessories such as Runcam Split, FrSky XLITE, antennas, etc. You can find these coupons on our coupons page. This section is constantly updated, so check back often.

If you own more than one multicopter, you wish there was a TX that controls all your models. The Walkera Devo 10 does, thanks to the fabulous (and free) Deviation firmware and a tiny and easy to install all-in-one module. 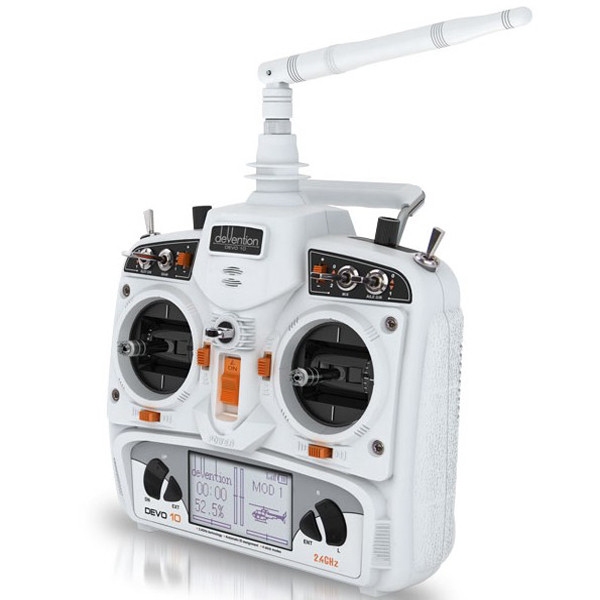 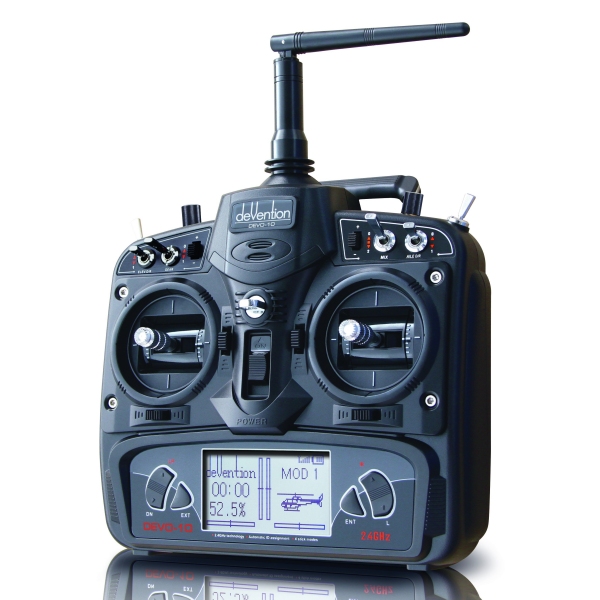 The Devo 10 comes with two flavors: the Black Edition and the White Edition. There are no differences between the two versions, but user tests have repeatedly proved that the range of the White Edition is 20% to 100% higher than the Black Edition, depending on the protocol and receiver used. Apparently the White has a more efficient antenna than the Black. However, this can be unscrewed and replaced by others, if desired.

If the range is more important to you than the color, get the White Edition for sure.

The European version of the Devo 10 is throttled to 10mW transmission power, while the international FCC version features full 100mW power. Please ask your dealer before buying. By installing the 4-in-1 module (described below), the power can be increased again to 150mW transmission power.

The respective transmission power can be individually set for each copied model stored – but as said: in EU are max. 10mW allowed.

As the name implies, the Devo 10 offers up to ten channels. Whether you can use it all depends on which receiver you use. Short explanation: four channels are already used to control the copter. Another is usually to switch the flight mode in flight (Acro / Angle / Horizon Mode). Another one to arm / disarm the motors. So there are six channels which you need at least.

However, since four further channels are still available, the LED lighting of the copter can be set to a channel so that the LEDs can be switched on and off by via a switch on the transmitter. On another channels / switches you can set the beeper function, so the copter beeps when you have lost it in the high grass.

Another channel can then be used for telemetry / RSSI use etc. With ten channels you are well served. Since the Devo 10 also has two potentiometers, you can also swing a camera gimbal, for example.

Connecting to the PC

If the original firmware is installed, connect the Devo 10 with the included coaching cable to the PC (one end to the TX’s trainer port, the other end comes into the MIC socket of the computer). In order to use the transmitter as a joystick with an FPV simulator, you need two free tools:

SmartProPoPlus (launch this one after plugging in your TX and keep the tool running while you’re playing).

My personal number one choice of all FPV simulators is FPV Freerider Recharged. It’s available für 10 EUR only and offers some gorgeous landscapes (woods, canyons etc.) and parcours (parking lot abandoned factory) to fly through.

The biggest highlight with the Devo 10 is the free Deviation Firmware that can be downloaded and installed. Originally, the Devo 10 “only” supports Walkera models. However, a group of users have developed their own firmware for the Devo TX (and improved it more and more over the last years). If the Deviation firmware is installed, the Devo 10 has can be extended by a hand stroke with many useful functions.

The best feature of the deviation firmware, however, is that it supports almost all existing protocols!

Here’s a list of all protocols, receivers and multicopter models that are (theoretically) supported by the Deviation firmware:

Again, the Devo 10 with the Deviation firmware masters almost all protocols and is capable to communicate with all possible receivers. At least on the software side. To do so on the hardware side, you need to replace the original transmission module of the Devo 10 with an upgraded module, the 4-in-1 Module. Don’t worry, installing this module is quite easy.

The TX module inside of the Devo 10 is not soldered, it’s just plugged in. Just pick it, pull it out and replace it with the new module. There are three wires coming from the new module. These wires need to be soldered to three distinct pins within your Devo 10 (see picture): 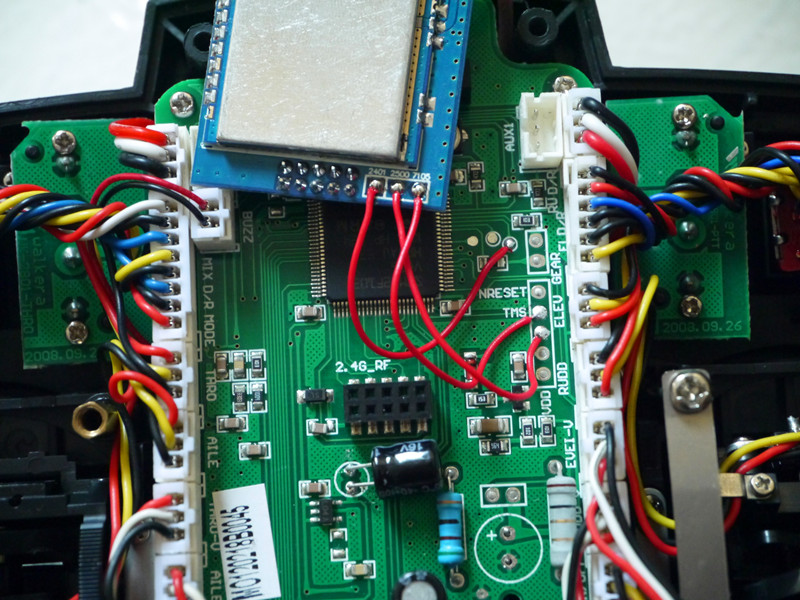 After installing the 4-in-1 module to the Devo 10, the last thing to do is to update the hardware.ini textfile of the Deviation firmware. This is to let the firmware know about the new hardware installed: